1,800 people weighed in against proposed sites in Ward 9

The City of Calgary says after “significant” public opposition, it won’t be going ahead with four proposed public cannabis consumption sites.

The sites were meant to address a legislative shortfall, once cannabis is legalized across Canada in mid-October. Under Calgary’s bylaw, it isn’t allowed to be consumed in public or in hotels. Condos and apartment buildings can elect to ban consumption or not.

“There was a variety of concerns that covered things like nuisance … concerns about impaired driving,” said Matt Zabloski, lead for the city’s cannabis legalization project, at a Wednesday press conference.

Public engagement sessions were held for Calgarians on the four sites — all located in Ward 9 — from Aug. 27 to Sept. 7, and more than 1,800 people weighed in.

“The intention in providing these public consumption areas was to ensure that everybody would have a safe, legal place to consume if they choose to,” Coun. Gian-Carlo Carra, who represents Ward 9 and initiated the proposal, said in a release.

“Amidst the support and significant opposition to these proposed cannabis consumption areas, the argument that resonates with me is that only a couple of sites in a city this size does not meet the test of being broadly accessible and would lead to foreseeable challenges.”

The four proposed consumption sites were:

The sites were selected based on criteria including distance from schools and areas frequented by children, and not being in off-leash or natural areas. ​

But the vetoing of the four sites doesn’t entirely rule out toking in public within the city.

Councillors will still be able to begin the process to have designated consumption sites in their wards. City administration will identify potential areas that fit the restrictions, and then citizens will be able to weigh in.

Residents in Bridgeland had put up protest signs in Murdoch Park, one of the proposed sites, while the public engagement process was underway. 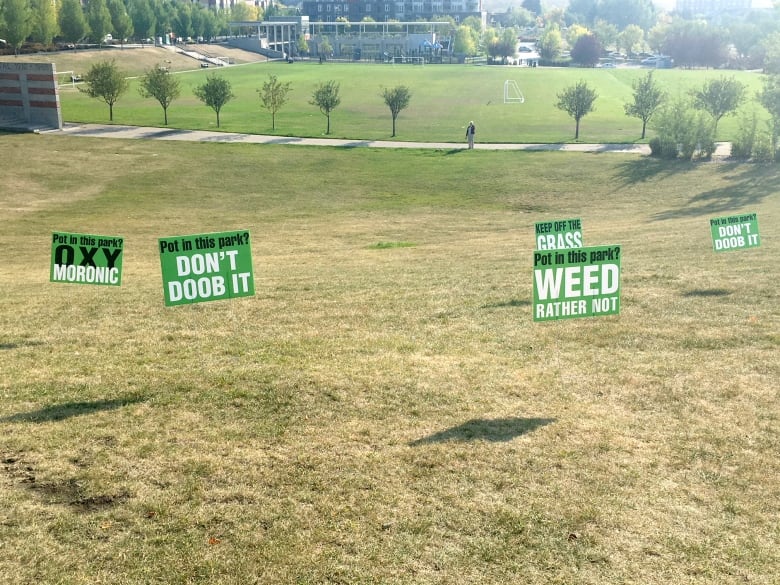 Carra said approximately 75 per cent of those who commented were opposed to the proposed sites.

He said some of those were people who were strictly opposed to the legalization of cannabis in general, but others pointed out that concentrating the sites in one area of the city could cause problems.

“This really is only going to work if there’s a diffuse network of these things and you don’t concentrate them,” said Carra.

“The fact that these sites would be taking on the brunt for the entire city, it really became an untenable situation.”

The councillor also voiced hope the province will reconsider its decision not to allow cannabis lounges.

“Not having a legal place to use a legal substance shoves us into a grey zone,” said Carra.