The benefits of ‘topping’ a Cannabis plant
Home Legalize Legal Pot in California: Everything We Know

Full legalization is set to arrive in the Golden State in January 2018 – but what is that going to look like? With several states expanding marijuana legalization this year, many eyes are firmly fixed on California. Between the famed cannabis strains of the north, the rapidly moving edibles scene and the growing marijuana tech industry blazing in Silicon Valley, there’s a lot at stake. Heather Azzi of the Marijuana Policy Project tells Rolling Stone that it’s heartening to see the state taking steps in the right direction. “California has had an unregulated market for so long, it’s just great to see things moving toward a more regulated marketplace,” she says.

Last November, California passed Proposition 64, the Adult Use of Marijuana Act (AUMA), in which 56 percent of voters expressed a desire to legalize marijuana use for adults 21 and over. However, it’s not as simple as flipping a switch – the state is facing a regulatory nightmare that it must untangle before January 1st, 2018, when the state is required to open applications for licenses so businesses can begin legally selling recreational marijuana. California also faces challenges given the current legal status of marijuana on the federal level, and Attorney General Jeff Sessions’ interest in eradicating the trade, even though Congress has deprioritized marijuana prosecutions. But despite potential federal obstacles, the state legislature – and Governor Jerry Brown – are getting ready to open the floodgates to what is expected to be the largest legal market in the world. Here, what you need to know about California’s legalization efforts – and what they could mean for you.

What kind of marijuana laws are already on the books in California?

In 1996, California voters passed Proposition 215, making it the first state to legalize the use of medical marijuana for qualified patients. Subsequent legislation included Senate Bill 420 in 2003, which created a framework for monitoring medical marijuana usage, and Senate Bill 1449 in 2010, which made possession of less than 28.5 grams a misdemeanor.

In 2015, the state substantially overhauled its marijuana infrastructure with the Medical Cannabis Regulation and Safety Act (MCRSA), streamlining and clarifying laws pertaining to how and where medical marijuana-based businesses could operate in the state. Critically, the legislation made it possible to set standards for issuing licenses to operate. Why the delay? Paul Armentano, deputy director of the National Organization for the Reform of Marijuana Laws, or NORML, says that the legislature spent two decades dragging its feet – in a sense, it was this inaction on the state level fed the voter push to legalize, and regulate, the market.

With the passage of the AUMA, the state faces a problem: it could develop two regulatory tracks for marijuana, one for medical (MCRSA) and one for recreational (AUMA), or it could attempt to streamline them. In Washington State, which did opt for two tracks, the rollout has been messy – for example, poor implementation of the rules determining who got a license for a legal marijuana dispensary allowed recreational marijuana to flourish while suppressing medical cannabis. By contrast, Colorado streamlined its medical and recreational cannabis regulation for a much smoother transition, with the key difference for consumers revolving around the rate at which their purchases are taxed.

How will the state handle all these existing laws?

Governor Brown has opted for streamlining in a 79-page budget trailer bill, reconciling the aspects of the MCRSA and AUMA that conflict. That trailer bill provides an informative look at the kind of cannabis industry the state wants to build, and how it intends to enforce it – when faced with conflicting clauses, the trailer bill tends to err on the side of the AUMA, which is more permissive in several respects. For example, under MCRSA, cannabis-based businesses need state and local permits to operate, with the AUMA simply requires applicants to comply with local laws such as zoning requirements — and, when relevant, local permits.

The Drug Policy Alliance, which is dedicated to reforming drug law and policy, has spoken out in praise of the bill’s “comprehensive” and “inclusive” framework, noting that it respects “the voters’ intent.”

Meanwhile, three California agencies – the Bureau of Medical Cannabis Regulation, Department of Public Health and Department of Food and Agriculture – are also engaged in the rule-making process. They just released proposed regulations surrounding manufacturing, cultivation and testing standards for medical marijuana, with similar rules for recreational cannabis rolling out later this summer, once a cluster of related bills has moved their way through the legislature. The agencies are currently accepting comments and holding public workshops to refine the regulations, with the goal of enacting them in time for the January 1st deadline.

What kinds of additional regulations are expected to be introduced?
For consumers, legislation and regulation will determine who is growing, handling and selling their marijuana – and how easy it is to purchase on the local level – but there are also quality control issues. One is the testing requirement established by law and reinforced with regulations, with both medical and recreational cannabis ultimately subject to strict testing requirements to identify and disclose known psychoactive compounds in marijuana in addition to identifying contamination with mold, fungus, pesticides, and other adulterants. Testing should keep consumers safer in addition to helping people to more accurately control their dosage, a particular concern for medical cannabis users.

Who will profit from the new industry?
Within the cannabis industry, there are some concerns about the types of businesses the resulting legal framework will create – when California’s green rush goes legit, who stands to benefit? One worry is that out-of-state players (like big tobacco companies) will take over, cutting smaller companies out of the market. The trailer bill, for example, strikes an existing residency requirement, allowing anyone – not just California citizens – to open a marijuana-based businesses. 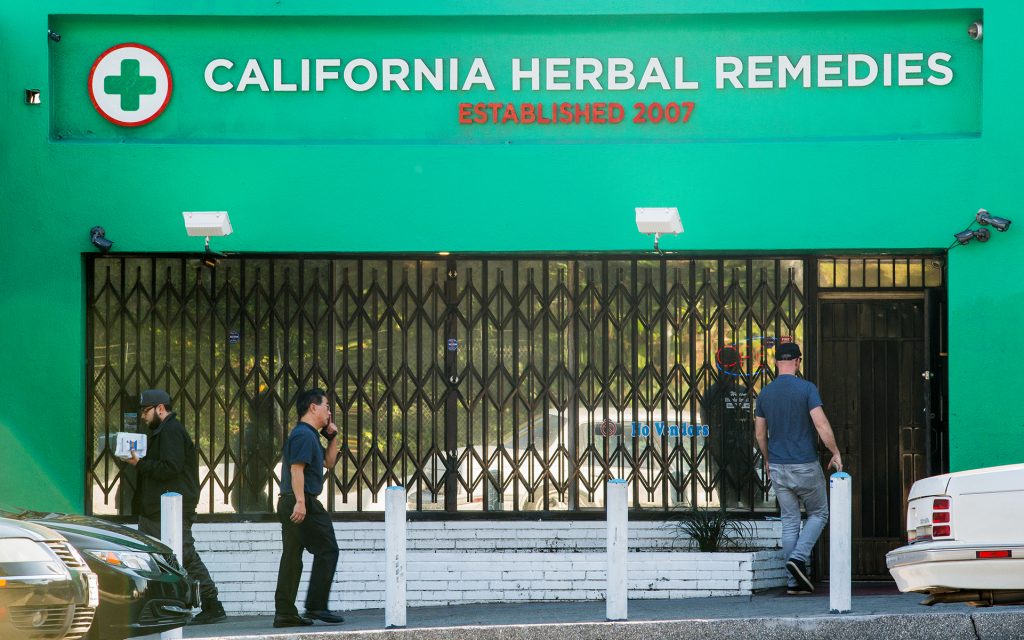 Vertical integration, with licensees allowed to hold licenses in several different industry categories – such as distribution, cultivation and manufacturing – is another hot topic for an industry worried about turning into a new iteration of Big Tobacco. MCRSA does not allow vertical integration, while the AUMA does, a move the California Growers Association feels could be detrimental to small businesses and may increase the incursion of corporate interests. The language of the AUMA is currently prevailing in the trailer bill. The group lodged opposition, arguing that this undermined the “level playing field” offered under MCRSA. Armentano notes that restrictions in the AUMA are designed to prevent “big operators” from entering the state, adding that “no one wants to see a big tobacco-type situation in California.”

One license category, however, remains exempt: Those holding licenses to operate testing facilities may not hold licenses in other categories, a move designed to prevent conflicts of interest.

How much autonomy will local governments get?
Another core question revolves around the issue of local powers, as a number of counties and municipalities want to exert control over the shape of the industry within their borders, and are racing to enact ordinances and rules of their own in advance of the impending deadline. The League of California Cities has expressed objections that the proposed regulations might undercut local governments. This is a particular concern for regions reluctant to embrace recreational marijuana, though the state’s goal is to avoid a confusing legal patchwork that makes it functionally impossible to manage the legal marijuana trade.

Armentano points out that no laws or proposed regulations stop localities from implementing additional restrictions on marijuana, including banning recreational sales altogether. Some cities, like Oakland, are even using this as an opportunity to innovate – Oakland’s city council is in the process of developing an “equity permitting” system that attempts to remedy racial imbalances in the legal marijuana industry.

What will this mean for the environment in California?
The trailer bill also sets out standards surrounding water usage, a perennial concern in a historically drought-stricken state, as well as mandating that the Department of Pesticide Regulation provide “guidance” on appropriate pesticides. For environmentally conscious consumers, these should all be concerns – as is the framework for the possibility of organic certification in the event federal law changes tack, and the mandate for origin appellations continues to move forward. Thanks to the extensive track and trace system following cannabis from seed to store, when a label says you’re looking at Humboldt’s finest, you will be.

What does this mean for edibles?
Edibles are also being swept up in this legislation and regulation, with some proposed changes that may catch consumers by surprise. For example, cannabis products will not be able to contain caffeine, nicotine, dairy, or alcohol, which means no infused alcohols, no alcohol-based tinctures, no pre-rolled spliffs, no infused ice cream, and no caffeinated treats. The state is also imposing dosage limits, with no more than 10 milligrams in a serving, and no more than 100 milligrams in a single package. The dosing limits are of particular concern to medical patients, who may need high doses that make packaging limitations extremely frustrating.