Since a July 1 deadline to start withdrawing from international narcotics treaties has passed, the federal government is left with fewer, and much more awkward, ways of legalizing marijuana by July of 2018 without breaking international law, an expert says.

“The government still does have some options,” says Steven Hoffman, a professor at York University in Toronto who specializes in global health law. “Those options are not all great, but they are still options.”

Canada has signed three UN drug treaties, one dating from 1961, pledging to ban marijuana (along with other drugs). We can leave the treaties after a notice period, but legalizing recreational marijuana by next July, as the Liberals have promised, would have required giving the UN notice by Canada Day, which is now nearly three weeks ago.

“Before July 1, I had been calling for Canada to withdraw from the three UN drug control treaties,” Hoffman says. “They are outdated treaties, which do not reflect the current stats of medicine and science. The treaties were adopted in a time when there was a different view of what addiction was.”

Putting off legalization. “The government has promised to make cannabis legal by July 1, 2018, but that date can always be delayed in order to give Canada time to address its international legal obligations.”

(This option might appeal to the provinces, which have to figure out how to set up and regulate a retail cannabis distribution system which may be in place less than a year from now. On Tuesday, Manitoba Premier Brian Pallister called on Ottawa to delay legalization for a year, citing what he called “a tremendous number of unanswered questions.”)

Amending the Constitution. The treaties allow countries to permit people to use a banned drug if it’s in that country’s constitution. Bolivia put a right to chew coca leaves, an ancient practice in that society, in their constitution after a referendum in 2009 for this reason.

But Hoffman calls this option “infeasible”.

“Just imagine a right to possess and consume cannabis in the Charter of Rights and Freedoms. Equality rights, freedom of speech rights, cannabis rights – one of those things is not like the others.”

Saying that we’re legalizing marijuana for “scientific research.” The treaties allow otherwise banned drugs to be allowed for scientific purposes, but claiming that the long-term legalization of recreational marijuana across the whole country was done at least in part for scientific reasons “is some creative lawyering,” Hoffman says.

Heavily censored documents released to Global News under access-to-information laws, and the fact that the deadline has passed, seem to indicate that Ottawa is looking at a fourth option: legalizing pot, staying within the treaties, and just living with the inconsistency.

A briefing note prepared for then-foreign minister Stéphane Dion last year makes references to Uruguay, which legalized recreational pot in 2013 without leaving the treaties. While the UN’s International Narcotics Control Board disapproved, nothing much else happened, the note says:

“While the INCB remains steadfast in its assessment that Uruguay’s marijuana regime is inconsistent with the 1981 Single Convention on Narcotic Drugs, the Board has never raised the possibility of applying punitive measures against Uruguay over the issue.”

Transform, a U.K.-based drug policy reform organization, suggested “principled non-compliance” with the treaties, at least as they apply to cannabis, in a 2016 paper.

“Treaty non-compliance as domestic laws and practice change is a fairly common feature of regime evolution and modernization,” the paper argued. “Waving away worries about non-compliance by resorting to dubious legal justifications is much more an expression of disrespect for international law.”

“Opting for reform and acknowledging non-compliance can help set the stage for treaty reform options.”

The INCB has aimed criticism at Canada’s plans to legalize recreational pot, which was a Liberal campaign promise in the 2015 election.

In October of last year, INCB director Werner Sipp met with Dion and Federal Health Minister Jane Philpott in Ottawa to discuss marijuana legalization. Sipp had requested the meeting. Little is publicly known about what happened, but a briefing note prepared for Dion beforehand said that the INCB delegation “is likely to be critical of Canada’s decision.”

In March of this year the INCB’s annual report warned, in a section on Canada, that the treaties made no allowance for legal recreational cannabis:

“The limitation of the use of drugs to medical and scientific purposes is a fundamental principle that lies at the heart of the international drug control framework, to which no exception is possible and which gives no room for flexibility.”

(The report also criticized the United States, where four states have legalized recreational marijuana and four more have voted to do so. The U.S., however, is something of a special case — the federal ban on pot is still in place, though not often enforced, while states aren’t bound by international treaties.)

In the meantime, the Liberals have been silent about how they plan to tackle the issue.

In May, they avoided directly answering questions on the issue in the House of Commons:

This week, a spokesperson for Foreign Minister Chrystia Freeland wrote in an e-mail that “Canada remains fully compliant with its obligations under the international drug treaties at this time.” “It should be noted that four American states have legalized recreational marijuana while another four have voted to legalize. We are committed to working with our global partners to best promote public health and combat illicit drug trafficking.” 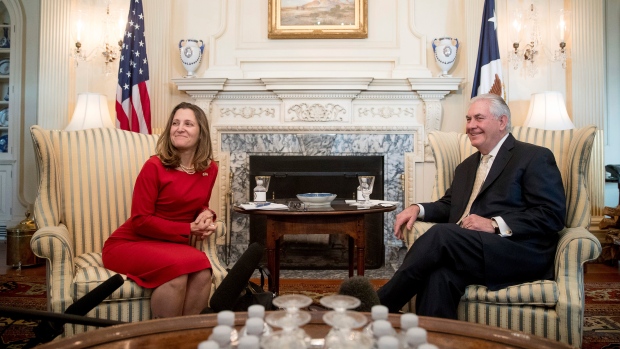 “My own hope is that the government finds a way to achieve its political promise of legalizing cannabis without breaking international law in the process,” Hoffman says. “And I think that is still doable. I think the government should, as soon as possible, make clear their plans for legalizing cannabis without breaking the UN drug control treaties.”

“Breaking international law comes with all sorts of consequences. You can’t pick and choose what international treaties to follow without encouraging other countries to do the same.”